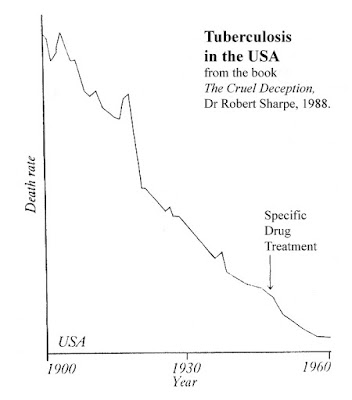 By the 1940s there were a variety of antibiotics that allowed physicians to control most cases of tuberculosis. For patients that seek medical attention and follow the prescription of their physician, tuberculosis can be controlled and even cured. By 1969 it seemed that the disease had been conquered, and attention was diverted from it.

It seems to be normal for human beings to forget that of which they do not see. When we don't have a war for a while, we tend to assume one will never occur again and we cut our military spending. When a war occurs, we usually aren't prepared. The same can be said of disease. When we go years without a plague, we assume the disease is cured. When the plague strikes, we aren't prepared. A perfect example of this is the Spanish Flu of 1918.

There was a friend of mine who often said that we ought to have a war every ten years so we don't forget that freedom comes with a price. We should have a plague every so often so that we don't take these diseases for granted. Surely we don't want wars or plagues, but my friend had a valid point.

By the 1930s and 40s sulfa drugs and antibiotics were discovered as a means of treating infection. These and other medicines allowed physicians to effectively treat and even cure tuberculosis. This decade saw a rapid decline in the number of tuberculosis patients.

According to Elaine Landau, in her 1995 book "Tuberculosis:"


As late as 1969, the federal government was still channeling annually more than $20 million in TB project grants to local clinics and hospitals throughout the nation. But the declining TB rate made people feel that the crisis was over. So when the government began giving blocks of aid to states and municipalities to be used at the areas' discretion, the funding generally was not expended for TB controll.

As time passed,countless successful TB programs were dismantled. In New York City alone, more than one thousand beds formerly reserved for TB patients were eliminated from municipal hospitals. Although outpatient services were supposed to be established to ensure the disease's continued decline, these were never made available. Instead, funding was diverted to meet more immediate needs. As one physician who's treated numerous TB victims described the situation, "We knew how to cure it. We had it in our hands. But we dropped the ball. (1, page 3, 4)

Once the "ball was dropped" it was difficult to pick it up again. Organizations with the ability to provide methods of preventing the spread of such diseases, such as the Centers for Disease Control and Prevention (CDC), were not provided with enough funds to effectively perform this task. (1, page 34)

In 1989 a plan was made to provide the CDC with $30 to $34 million dollars to create a TB control plan. Yet the plan was never made "because each year that it was proposed, the White House eliminated its funding from the budget." A similar plan was proposed in 1993 to offer $484 million for TB prevention, but the budget was cut by the Clinton administration to $124 million before it was sent to Congress. So the return of a disease that once ravaged a nation was greatly ignored by Reagan, Bush and Clinton. (1, page 35)

What may have opened the eyes of the government was the AIDS epidemic that struck during the 1980s. Studies showed that with weakened immune systems, up to 50 percent of AIDS victims were developing tuberculosis, and were unable to fight it off. This is one reason tuberculosis spread through prisons and homeless shelters rather fast, particularly in cities like New York "where nearly one-fifth of prison inmates have TB, but none of the jails have separately ventilated cells for contagious cases." (1, page 35-37)

To make matters worse the TB bacteria has the ability to mutate to create drug resistant strains. This occurs when people who are given antibiotics, which are proven to cure TB if used properly, were not taking the antibiotics once they started feeling better. Effective treatment usually takes 6-9 months, but many would stop taking it within weeks.

Landau also said that "this is actually worse than not taking any medication at all, because over a period of time the illness no longer responds to any form of medication, and they have, in fact, dissipated the drug's effectiveness... Unfortunately, significant numbers of people have misused their medication this way. The tendency to do so appears to cut across racial, class, and economic lines." (1, page 39)

Studies show that up to 50 percent of TB patients do not take their medicine as prescribed, and that 14.1 percent of TB cases responded poorly to TB medicines. Studies also showed that TB resistant strains have a 50 percent mortality rate. (1, page 39-40)

Posted by John Bottrell at 9:49 AM