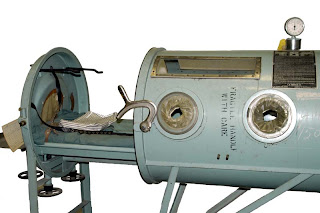 His father worked as Commissioner of Health in New York during the polio epidemic of 1916, and perhaps as a result of this inventor John Haven Emerson (1906-1997) had a recollection of suffering from the illness as a child.  So he had a vested interest in inventing a mechanical respirator that was more efficient and more comfortable than the Drinker and Shaw Respirator.  He ultimately refined the Drinker and Shaw Respirator and came up with his own product that became the Emerson Respirator.

Like the Dinker and Shaw Respirator, the patient would lie on a table that could be slid in and out of the tank.  The table was often referred to as a cookie tray.  The side of the tank, which was blue, had portal windows so nurses could have access to the patient whenever they needed.  Over the patient's head was a mirror they could see behind then. The bellows were stored under the tank, which was lightweight, and wheels were added to make the devices mobile. (1) 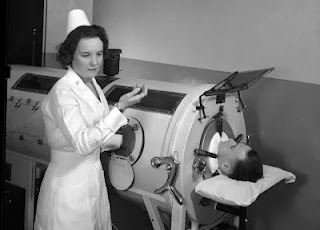 The machine could also produce a large range of tidal volumes by adjusting the pump settings, and it was relatively quiet (a noted improvement over the Drinker Respirator).  In the event of power failure there was a hand crank at the foot end of the device so the doctor or nurse (or later the inhalation therapist) could provide breaths manually. It was also simple to produce, which made it affordable.   It was said to be about half the cost of the Drinker Respirator.   Emerson's design still cost as much as a house, yet it was still somewhat reasonable, or about half the cost of other such respirators at the time. (see chart below) (2)

Emerson introduced his iron lung during a polio epidemic in 1931, and it soon became the most popular respirator in hospitals in Europe and the U.S.  Emerson's respirators continued to be the most used ventilator until  the 1950s and 60s when the Jonas Salk and Albert Sabin polio vaccine became available for kids around the world.  The vaccine was first introduced in 1954, and injected into millions of kids between 1956 and 1960 "with dramatic results." An oral vaccine was later introduced and administered to millions of kids between 1962 and 1964. (3)

There were various versions of the Emerson Lung, and the Drinker and Shaw Respirator, that were available in hospitals around the United States and Europe.  Richard Daggett, in his 2010 book "Not just polio: my life," explains that the machines made a whooshing sound as air entered and exited the patient's lungs. He explained that he was placed in a Drinker Collins Iron Lung in the early 1950s, and he described waking up in the machine: (4, page 30, 31)


There was a mirror over my head and, in the mirror, I could see a row of large black bellows across the room.  They were going up and down.  I didn't know much about respirators, but I figured one of them must be making me breathe.  I tried to figure which one it was by timing my breathing with the motion of each bellows.  None of them seemed to match my breathing pattern. It wasn't until later in the day, when my mirror was adjusted upward, that I realized that those bellows were all attached to the underside of other respirators.  I couldn't see mine because it was beneath me.... I was in a Drinker Collins Iron Lung."  (4, page 29)

Daggett explains that as a child it was difficult to grasp the seriousness of having bulbospinal polio and, ultimately, pneumonia.  He wrote: "I was very naive. I had no understanding of how serious my condition was.  Oh, I knew I was completely paralyzed, but the long-term impact did not sink in.  My greatest concern was that I might miss the first day of school." (4, page 33)

It must have been common for these patients to develop pneumonia, as their would have been constant secretions forming in the upper air passages that needed to be cleared, or they would be inhaled, thus causing respiratory infections such as pneumonia.  Daggett mentions the constant urge to blow his nose, which he often did "without even using a tissue." (4, page 31, 33)

Yet bulky iron lungs made it hard to access patients. Their bed had to be slid out from inside the tank, and artificial breaths performed manually. One person had to turn the patient, while another cleared secretions.

This problem was remedied somewhat with the invention of a suction device in 1937.  Daggett said he had a tracheotomy that gave caregivers an easy means of clearing his airway. This may have been aided by an early suction device. (4, page 30)

Iron lungs were viewed as neat life saving devices. Yet they were also viewed as horrible way to spend the rest of your life. Thankfully, for most of those kids inflicted with polio, the paralyzation was only temporary, with most recovering after spending a week or  two inside a tank. Many, like Dagget, lived to tell their stories.

Iron lungs were replaced during the 1950s by positive pressure breathing machines. This was a necessary change because it made it easier to access patients. This also made it easier to breathe for patients during operations and in emergency situations. Still, during an era when many children were inflicted with a paralyzing disease, the iron lung was a godsend.
Here are some interesting facts about iron lungs from http://americanhistory.si.edu/ :
References

Posted by John Bottrell at 2:11 PM