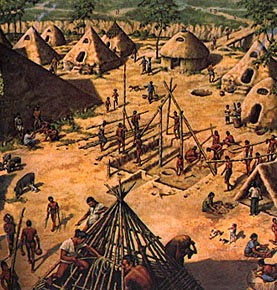 Asthma-like symptoms were described in ancient societies in Egypt, China, Korea, India, Greece and Rome, and while various terms were used to describe respiratory ailments, most societies believed in one way or another that disease was caused by an imbalance of bodily humors.

The humors are the bodily fluids. Primitive people must have noticed puss on open sores, and colored phlegm in those sick with breathing trouble.  They must have noticed the diarrhea and vomiting of people with stomach discomfort, pain, nausea and malaise.

So early on they must have associated the humors with being associated with disease, and at some point linked them with the cause.

They most likely would have noticed that, upon spitting up a wad of phlegm the person who was short of breath felt better, or that after a good bowel movement or after vomiting, a person with stomach discomfort felt better.

So early on they must have linked the humors with the cure.

Some humors that were most certainly observed were blood, phlegm (sputum, nasal secretions, saliva), water and bile. (1, pages 111-112)

There are different descriptions of the humoral cause of disease.  For instance, the Chinese describe it as an imbalance of yin or yang causing an obstruction of sorts to the flow of human life, or qi.  The Ancient Greeks believed it was an imbalance of the four bodily humors:  blood, phlegm, yellow bile and black bile.

Yet whatever way you look at it, the similarities of the causes and cures of diseases by different civilizations is stunning.  It almost makes one think such a theory was proposed before mankind split up into six different regions during the neolithic revolution or agricultural revolution nearly 10,000 years before the birth of Christ.

Either that or there was more communication between Ancient Eastern and Western societies than historians are aware of.  And in this way was devised the convection theory by Friedrich Ratzel in 1882 which states that nations have "identical phenomenon" because of communication between the various groups of humans, according to Fielding H. Garrison, in 1921 his book "An introduction to the history of medicine."  (2, pages 17-19)

A separate theory mentioned by Garrison is the convection theory devised by Adolf Bastian in 1881.  This states that "the appearance of identical ethnic phenomenon in different relations of space and time is due to the spontaneous development of certain 'elemental ideas' which are common to primitive man everywhere.(2, pages 17-19)

Garrison explained it as the "Solidarity of folkways."  This theory postulates "humans have instinctive actions" that cause them to gather in groups, form societies, and generate myths to explain natural phenomenon.  They tend to reach a "common point of similarity or identity." (2, pages 17-19)

Worded another way:  "The development of the individual is but an epitome of the development of the race. Left to itself in a favorable environment, any savage tribe will inevitably evolve a culture all its own, for the regulation of food supply, sexual and social relations, adjustments to the unknown, manifesting itself as a political economy, ethics, law, medicine, religion, and so on." (2, pages 17-19)

In this way it's believed certain human actions are instinctive, no matter when a society is formed, at a certain stage in it's development.  This may explain why the ancient Egyptians created their pyramids and mummification, and similar pyramids and mummification methods were discovered in Mexico thousands of years later.  There may have been no communication between the two groups, just that the Mexicans were slower to develop their society and advance to this state.

Religions and laws in all societies are ultimately realized to be an important element of maintaining peace in the society, and a government with a totalitarian ruler was determined to be the best way to get people to do things that were needed to be done for the society to function, such as tending to the land, creating structures, and managing irrigation.

And plants were determined to have poisonous and medicinal properties in the evolution of the society.  To explain how they worked myths were created.  Myths were also created to explain health and sickness.  It just so happens at a certain point the myths appear to be the same, such that disease is caused by an imbalance of some sort of substance, which the Greeks called humors and the Chinese called Qi and other societies called something else.  Yet the ideas are similar, and this type of medicine is referred to as folk medicine (folklore).

These similarities are the natural, or instinctive, evolution of human societies.  And at some point the society will develop a need to communicate ideas from one generation to another, and this is where folklore comes in.  Poems and songs are recited to make it easier to remember stories and recipes, and then at some point a form of writing material and written language is developed.  It's by this we have evolved to where we are today as a society.

In this way, societies evolve as new ideas are thought up to make life better for the civilization, but the heart and soul of the people has never changed.  Humans always have an inert tendency to socialize, to think, to communicate, to breathe, to eat, to adjust to change, and to have empathy for fellow men and women.

Men and women observed their relatives and friends suffering, and yearned to find a way to help them.  They attempted to find myths to explain the symptoms they observed or their fellows complained of.  They created myths to give people hope and faith for a better future.  This is always essential, as death and sickness are omnipresent.  Life can be melancholy, and hope and faith are needed to give people a reason to do what they need to do to keep the society afloat.

Asthma, or asthma-like symptoms were believed to be caused by too much phlegm that causes a ceizure or epilepsy of the lungs resulting in various respiratory symptoms such as foaming at the mouth, cough, dyspnea (short of breath), and wheezes.  These symptoms would be the result of anything that causes dyspnea, including exertion from running or battle.  The remedy for asthma, as with any disease, was as simple as improving diet and getting plenty of sleep and exercise.

While the definition of asthma matured through the years, it wasn't until the mid 19th century that the myth of humoral causes of disease left the medical profession. This evolutionary advancement occurred in western nations of Europe and the United States.  In this sense, the humoral cause of disease was such a simple description of disease it was easy to believe, and this dogmatic theory lasted perhaps 11,850 years if not longer. Yet at a certain point in the advancement of knowledge science would be learned, and myths would be found to be myths.  Although I think it's safe to say that some medical myths still linger.


Even the great asthma expert of the second half of the 19th century, Dr. Henry Hyde Salter, didn't completely reject the humoral theory, although he was the first to successfully sway from this mindset. And even then it took a lot of convincing to finally change the minds of dogmatic physicians and an ignorant society.  It took science, and a lot of hard work by a few physicians struck by asthma.

While most modern civilizations have moved on from old myths, some primitive societies continue to believe in them.  They continue to worship gods and spirits, and justify health and sickness as being caused by transcendental forces.  Medicines are thus gifts from the other world.  As their society advances, as knowledge progresses, they too will some day reach the modern world.

Likewise, if our society continues to exist, society will continue to change.  Who knows what the future will bring.  Yet what we do know is that the heart of humans will continue to be the same.

Posted by John Bottrell at 9:34 PM No comments: